The UK house-building industry faces a slippery challenge when it comes to the rain.

A pattern of more extreme rainfall is projected to increase with higher temperatures, depositing more water on top of surfaces less equipped to absorb it, increasing the risk of flooded homes from surface water.

At the same time, the temptation (and pressure) to build on flood-prone land increases as the demand for new homes remains high.

According to a report by Housebuilder and Developer (HBD), home developers can play a significant part in helping homes and neighbourhoods adapt to the weather of the future as they strive to meet the housing needs of the nation.

This article outlines a few of the practical solutions available to planners and developers that could future-proof their projects from the worst effects of flooding.

Flooding - how can home builders future-proof their developments?

Why will there be more extreme rain?

Warmer weather leads to air being able to hold more moisture that is later deposited as rain. Drier ground and paved areas are less able to absorb the extra water, making land more prone to flooding when the rain comes.

Even if the global community meets it emissions commitments over the coming years and decades, the UK can expect the current pattern of higher temperatures and harder bouts of rain to continue into the future.

Why should developers care?

While many developers would agree it’s their duty of care to minimise this kind of risk, the economic reality is also that these houses must also be attractive to home buyers.

As the issue becomes more visible in the future, and more flood-prone areas are developed, more home buyers may be wary of the potential for floods to damage to their homes, driving a shift in demand.

Homes built must also be insurable at a reasonable price for the owner. A home built in an area with higher flood risks, without infrastructure around the home to mitigate those risks, poses a greater danger to insurers already counting the costs as they adapt to insuring a warming world.

What can home builders actually do?

The good news, according to HBD’s white paper, is there’s plenty home builders can do with the resources already available.

HBD’s white paper focuses on the deployment of sustainable drainage systems (SuDS), the collective name for a broad range of simple and easy to manage techniques, approaches, and systems that offer effective alternatives to pushing more water into sewers.

Some of those include –

While we do need those need roads, pavements, and driveways, these artificial surfaces often push water directly into sewers, offering it nowhere else to go. When sewers are asked to move more volume than they can cope with, the water can only gather on the surface, potentially damaging nearby buildings.

Permeable surfaces aim to replicate some of the absorbency of the natural world. These surfaces allow water to penetrate a series of layers that eventually let the water back into the earth, while also letting the water evaporate away closer to the surface, all while slowing its progress to sewers.

Clever permeable materials can even trap pollutants on their way through the layers, preventing ground water contamination from materials on the surface.

While a great deal of energy goes into thinking about how to get the water far away from where it lands, it’s fair to flip the question and ask why it can’t just stay close to where it lands.

Bioretention lets extra water pool up in specified ponds and depressions until it’s naturally absorbed by the ground, used up by nearby plants, or just evaporates at its own leisure.

Other elements of bioretention include deliberately planting tree pits or planters that would slow water’s journey to a sewer, holding it up in the soil (and on leaves) to let some of it get absorbed by trees, or even flowing into a control chamber.

For some areas, permeable surfaces and bioretention simply won’t be enough to mitigate risks from flooding – artificial intervention will be needed.

Soakways are already in use across many sites, not least because of their simplicity to introduce – dig a hole, fill it with soakaway materials, and water will attenuate in the soakaway where it can’t damage a house. They can be used in fields, gardens, or even under paved surfaces.

In other cases, pumps can be employed to move water from homes, often using a submersible pump with non-return valves on plumbing. In some areas, these pumps are being installed as a matter of course because of the existing risk of flooding, and may see more pronounced use in the future. 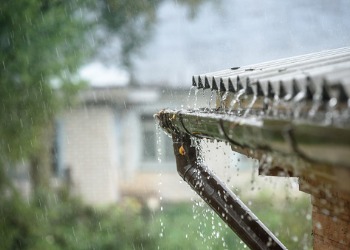 A cruel irony of the more extreme weather rain patterns projected to affect the UK in the future is that they may contribute to water shortages.

More water is projected to fall, but in more intense bursts, with drier periods in between. We don’t currently capture all of that water, with much of it running off.

According to the Public Accounts Committee, in the coming decades some parts of England face a “serious risk” of water shortages due to a combination of changing weather patterns and greater demand for water.

Harvesting rain water and keeping it for household use could alleviate those shortages. While rainwater isn’t ideal for drinking, showering, or cooking, it can be used for flushing toilets, washing machines, plant irrigation, and other non-potable applications.

Many people with gardens at home will be familiar with the common water butt hooked into their drains to capture rain for watering plants. More advanced systems use a similar premise – gathering water from places like roofs, percolation pits, and gutters – but hook the water back into a building’s plumbing system to be used for appropriate applications.

Depending on the building, these systems can be combined with green roofs to simultaneously attenuate and treat water before it’s returned to domestic use.

So what’s stopping us from using SuDS more often?

An industry survey from Edge Insights showed that 79% of developers were aware of SuDs approaches, but only 42% were adopting some of the techniques.

Cost is cited as their biggest hurdle, followed by a lack of understanding of the techniques involved, and then a lack of clarity for who has responsibility to drive and implement the changes needed.

In response to their industry survey, HBD’s white paper concludes that greater collaboration between planning, building, and local authority representatives is the key to compelling the government to bring demand for SuDS into legislation.

Questions? Get in touch

If you’re planning a development and have any concerns about how your implementation of SuDS techniques might affect your quote with LABC Warranty, feel free to get in touch. Our team would be happy to make sure your question is answered.

Get the latest news from LABC Warranty and the construction structural warranty sector by subscribing to our blog.
Subscribe to receive the latest news

Please Note: Every care was taken to ensure the information in this article was correct at the time of publication. Any written guidance provided does not replace the reader’s professional judgement and any construction project should comply with the relevant Building Regulations or applicable technical standards. However, for the most up to date LABC Warranty technical guidance please refer to your Risk Management Surveyor and the latest version of the LABC Warranty Technical Manual.

Gassed out - heating homes after the gas is gone

A look at how the the UK can approach heating our homes without gas and hit our net-zero targets, according to experts from the...
END_OF_DOCUMENT_TOKEN_TO_BE_REPLACED
Industry news

A panel of speakers from the housing industry outline the challenges facing the industry, now and into the immediate future.
END_OF_DOCUMENT_TOKEN_TO_BE_REPLACED
Industry news

CIH set out key areas for housing at annual conference

Gavin Smart, chief executive of the Chartered Institute of Housing (CIH), used his opening remarks at their Housing 2022 event to...
END_OF_DOCUMENT_TOKEN_TO_BE_REPLACED

Tell us what you think about this article and its contents by completing the form.

MD Insurance Services Ltd. is the scheme administrator for LABC Warranty and is authorised and regulated by the Financial Conduct Authority. Registered in England No: 3642459 | Website by Fuelius.