Elon Musk, CEO of SpaceX and Tesla has unveiled plans to convert the dirt excavated by his tunnel digging business, the Boring Company, into cheap bricks for potential use in the creation of affordable housing.

The Boring Company, formed by Musk to build a privately run mass-transport system, in an underground network of tunnels initially beneath Los Angeles, California. The first tunnel in the network is nearly complete and if you are interested, click here to see a time-lapse video of the tunnel.

Once complete, cars will be lowered onto electric skates and shuttled back and forth underneath the city at speeds of up to 200 KM per hour.

Musk announced the potential for the new building materials via twitter (see below). 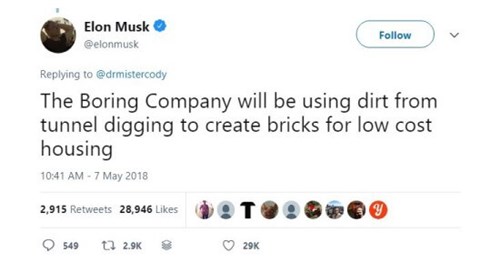 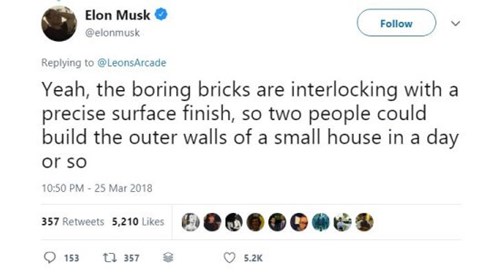 Company Spokesman, Sam Teller, confirmed the plans, saying that the bricks would be made from the ‘excavated muck’ produced as a by-product of the tunnelling.

Musk in an avid user of social media and has used Twitter in particular as a platform to launch other massive projects in the past, including the Boring Company itself (see below).

With housing a key issue all over the world at the moment this endeavour could come at the perfect time. Many countries are dealing with skyrocketing house prices and entire generations being priced out of the chance to own a home. Others are dealing with huge portions of the population living in near slum conditions, without permanent roofs over their heads. In either case a cheaper and more readily available building materials could provide an excellent solution to the problem.

The Boring Company also suggested that it may use the bricks to replace some of the concrete proposed to be used for a portion of its tunnels’ linings, which would be more environmentally friendly. This is largely due to the fact that concrete, the current material in use, actually causes a fair amount of greenhouse gasses when it’s being produced.

More information on the machine which compacts the dirt from the tunnels into usable bricks can be found here.

Get the latest news from LABC Warranty and the construction structural warranty sector by subscribing to our blog.
Subscribe to receive the latest news

Please Note: Every care was taken to ensure the information in this article was correct at the time of publication. Any written guidance provided does not replace the reader’s professional judgement and any construction project should comply with the relevant Building Regulations or applicable technical standards. However, for the most up to date LABC Warranty technical guidance please refer to your Risk Management Surveyor and the latest version of the LABC Warranty Technical Manual.

Gassed out - heating homes after the gas is gone

A look at how the the UK can approach heating our homes without gas and hit our net-zero targets, according to experts from the...
END_OF_DOCUMENT_TOKEN_TO_BE_REPLACED
Industry news

A panel of speakers from the housing industry outline the challenges facing the industry, now and into the immediate future.
END_OF_DOCUMENT_TOKEN_TO_BE_REPLACED
Industry news

CIH set out key areas for housing at annual conference

Gavin Smart, chief executive of the Chartered Institute of Housing (CIH), used his opening remarks at their Housing 2022 event to...
END_OF_DOCUMENT_TOKEN_TO_BE_REPLACED

Tell us what you think about this article and its contents by completing the form.

MD Insurance Services Ltd. is the scheme administrator for LABC Warranty and is authorised and regulated by the Financial Conduct Authority. Registered in England No: 3642459 | Website by Fuelius.